Cavenagh Bridge - Start of the journey

The famous Merlion sitting at the Singapore River mouth since 2002. It was located on another side of the river further to the east of the present site. On 6 Mar 09 it suffered the embarrassing strike of a lightning bolt and its left ear fell to the ground. It has since been made good and is still drawing millions of tourists to take pictures for keepsake.

Across the road behind the Merlion, to its right but not in the picture, is the Fullerton Hotel. This old but majestic building of the colonial era stood imposingly at the original river mouth once. For many years the Fullerton Building was the Central Post Office as well as the Inland Revenue Office. Now it is a 5 star hotel and in a class of its own. Its building structure looks like it is going to be there for another thousand years.

I am now standing at the Cavenagh Bridge looking at the Fullerton, at 6pm in the evening. This bridge was named after Colonel Orfeur Cavenagh, the last Governor of the Straits Settlement. And this is where our journey up the Singapore River will begin. 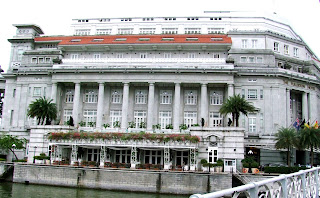 Looking up the Singapore River

On the left side of the river is the heart of Singapore's financial centre. All the tall buildings are banks. Maybank, Bank of China, Stanchart and United Overseas Bank(UOB).

Look at the clean and green water in the river. It wasn't like that for almost a century. The river was cleaned up in the the late 1970s to what it is today. The spot we are looking at in the photo was where the river boats would load and unload their cargoes in the earlier days. The huge wooden boats, called tongkangs then, were the king of the river. Their loads were rice, sugar and all the spices and food for the island. This was where the story of Singapore started.

The tongkangs had been cleared from the area when all the trading activities were moved out. You may see some of them in modified forms as river taxis or something else along the way. And oh, the water in the river were once blackish in colour, with a strong pungent stench, and with many debris due to the high river traffic. Today the water is good enough for our tap. It is now part of the island's reservoir. Many of the towkays or millionaires made their fortune from this river.

Both sides of the river have been redeveloped for entertainment and recreational activities while some have been retained as modern commercial buildings. The photo below shows Maybank on the left and Bank of China on the right. 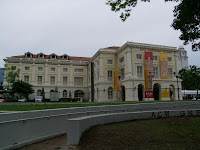 On the ride side of the river bank stands the Asian Civilisation Museum. This is where the arts and crafts of Asian countries are on display. The current exhibition is of Emperor Kang Xi period. You can see the colour banners on the front wall.

This is another colonial building called Empress Place Building and once housed the Victoria Memorial Hall. Many concerts were held here. And in front of the main entrance where the banners are, once stood the statue of Stamford Raffles, the founder this island for the British Empire. He stood tall on a high pedestal looking towards the sea. And we use to ask, 'Which of his hand was tucked in his pocket?' Of course none. His arms were both folded in front of his chest.

The left side of the building now houses the famous Indochine Waterfront Restaurant and Bar.
Posted by Chin Leng at 7:21 AM 1 comment:

The restaurant moved into the premises only a few years back. It caters to the well heeled and financial workers of the city. The 3 huge buddha heads fronting the restaurant are unmistakable and in a way tell the visitors of the restaurant's origin, Indochina. The cuisine is a mixed of Vietnamese and French.
Posted by Chin Leng at 7:17 AM 1 comment: 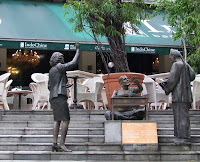 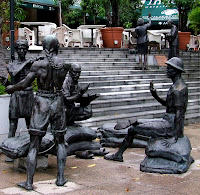 There were many sets of bronze figurines located around both sides of the river. These were commissioned to honour the pioneers who set foot on the island centuries ago. These two sets sit pretty on the front of the Indochine Restaurant.

The above photo shows the pioneers of the banking industry. Sitting in the middle is an Indian chettiar. The European banker on his right and a Chinese moneylender to his left. They were the forefathers of modern banking in the island.

The right photo shows a few coolies and a kepala or labour gang leader sitting on a sack of rice. The long plait of hair on the burnt back is obvious as to where they were from.
Posted by Chin Leng at 7:14 AM 1 comment: 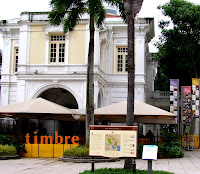 Located behind the Asian Civilisation Museum is the old Parliament House. It is now a restaurant called the Timbre. And standing to its right, looking into the photo, is where the statue of Stamford Raffles now stood. Look at his folded arms.


And behind him, across the rivers, are the skyscrapers of big financial institutions. The towering block acting as a backdrop to Raffles is one of two towers of UOB. It is claimed that the present site where Raffles stood was where he first landed on the islandin 1819. And the surrounding area was claimed for his government offices. 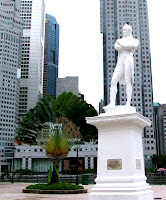 Back on Cavenagh Bridge

This is a tongkong which has been converted from carrying cargoes to carrying passengers and tourists. Its signature look is the pair of big eyes, one on each side of the boat. It has retained its original colour of the past except for the top that has been added on.

Looking out to the river mouth is the Anderson Bridge. Another historic bridge built by the Colonial Government and named after the Straits Settlements' Governor. Like the Cavenagh Bridge, both were made of steel. There were several bridges linking the two sides of the Singapore River.

I can develop similar blog tours for other places of interest, products or services at very reasonable rates. I can also do blog catalogs for businesses that need to forward them regularly to customers or catalogs that need regular updating, changes etc etc.

Blog catalogs are very cost effective and easy to maintain.

For enquiries please email me at chinleng@dbsvickers.com.